Back in 2001 I had my first idea for a Federation civil War but it didn’t involve section 31 like my newer idea does. This set of pictures show how one side might get new ships by sending out distress calls and with the use of stolen Klingon ships hi-jack any ships that come along. Like these two poor Akiras in these pics. The idea wasn’t all that great then and I kind of lost interest and stopped after six pictures. 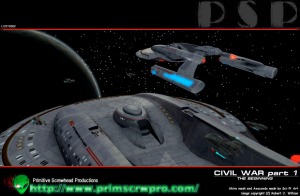 The first and probably favorite picture in the series of pictures. I like how the Akiras look and how the Anaconda class shuttles look swarming around them.

This shot was really nothing but an attempt to show of these ships.

Here I wanted a shot of the two Akiras approaching the Cheyenne. 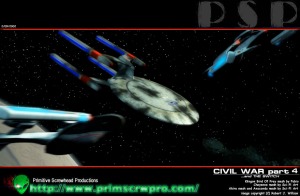 Here the two Akiras close in on what they believe to be the crippled Cheyenne. In the right lower corner you can see a stolen Klingon Bird Of Prey begin to decloak.

The two Klingon ships are now fully decloaked and ready to attack. 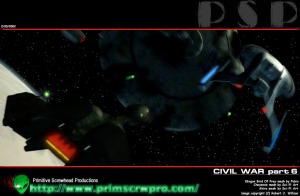 In this, the last image. The stolen Klingon ships start to fire on the the two Akira class ships. Not to destroy them but to take them as their own. If I had continued the story the Cheyenne would have woken convincing the Akiras to give up.

“Intelligence is not a privilege…it’s a gift. And you use it
for the good of mankind.”
-Dr. Otto Octavius
Spiderman 2 ****

One comment on “My First Federation Civil War Idea (2001)”